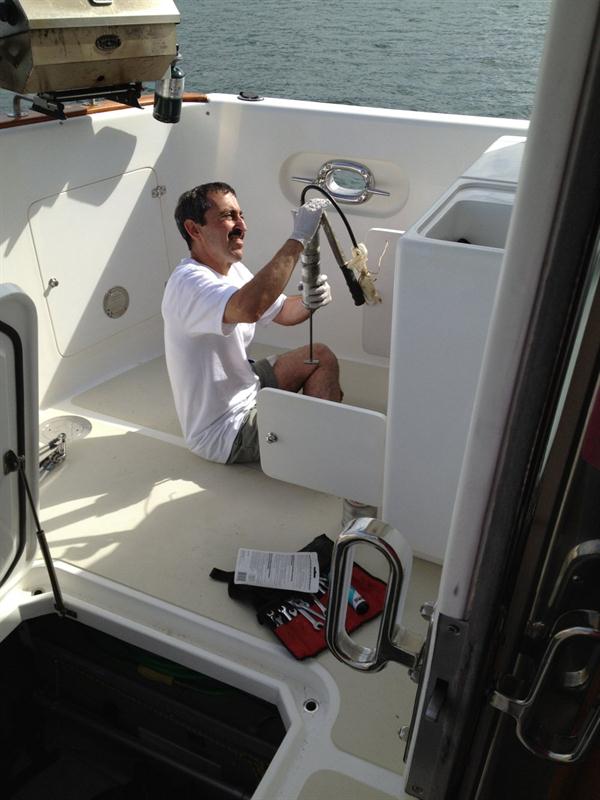 Ron in his element in Duet’s cockpit

So there we were, with a new (to us) boat, all ready to go cruising. Actually not quite. First Nancy had to get through all the logistics of boat paperwork, dockage, insurance, changing the boat name, etc. Not only that, but we needed sheets, towels, galley ware, gear, tools and too many other items to list. Nancy was in her element. Ron, when applied to for direction, selected an enormous number of tools from his shop (as well as ordered some new ones), all of which were mission critical, and therefore outranked lesser items like pots, pans, etc. Then he went to work and left it all in Nancy’s capable hands.

It became apparent that Nancy would need to drive to Seattle. The cost of shipping Ron’s tools alone paid for the trip. Soon enough, our SUV, groaning under the weight of everything that absolutely had to go, departed Incline Village for points north. Fortunately, our neighbor, Linda, who makes the trip to Ashland, Oregon, every year for the Shakespeare Festival, gave Nancy great directions. Unfortunately, several days before departure, a massive forest fire broke out along the route.

One of the things we’ve learned in 5 years of living in the Sierras, is that nothing here is small. Big trees, big trucks, big storms and, big forest fires. So Nancy set off, carefully plotting a route to take her around the fire if need be. But, when she got there, it the fire had been beaten back and she was able to continue directly. Not only that, but she got to see lots of firemen, which our lady readers know is always a good thing.

So Nancy traveled 900 miles, stopping overnight in Eugene, to meet Ron at Seatac airport. Seatac is actually Seattle airport, but is so named to keep the folks who live in Tacoma from feeling left out. After a 48 hour trip, Nancy arrived about an hour early. Ron, at the mercy of the nation’s air transport system, was 60 minutes late on a 90 minute flight.

Duet’s slip, courtesy of Frank Durkenson, is in Cap Sante Marina, about two hours north of Seattle. Having learned our lesson about arriving late to a cold boat many years ago, we spent the first night in a hotel. First thing the next morning we rushed over to see our new acquisition. Already aboard were our detailer and our name changing expert, busy converting her from her old identity to her new one. A small note on name changing. We never did a major ceremony with the 46 and she carried us safely more than 10,000 miles over 8 years. So, we haven’t done anything too exotic with the 50 either. We had a toast to her new name and that was about it.

Anyway, there we were on the first day. Ron immediately set to work crawling around to identify everything, in case something went wrong on our first cruise. Nancy set off to acquire all the items that didn’t fit in the truck on the way up. This included food, various household goods and other things, but not wine, which somehow got a priority assignment and arrived directly from Nevada.

Several happy days were spent in this mode, learning and sorting. The boat was extremely clean, courtesy of her previous owners, so Nancy spent most of her time trying to figure out where to put things and then moving them around when it didn’t work out. Ron remained out of sight somewhere doing technical things which seem to involve wearing his LED headlamp and writing lots of notes.

Finally, we were ready to set off. We didn’t feel ready actually, but on the principle of “its now or never” we figured we’d give it a try. The weather was beautiful, unusual in the PNW, and so there were no more excuses. We even had lots of local knowledge from our slip mates, Bill and Arelene on the N46 Andare, and from N50 Seaclusion owners Doug and Barb. Bill and Arlene previously owned N62 Autumn Wind, and also completed a circumnavigation on a custom built trawler. Doug and Barb have been cruising the PNW and Alaska for many, many years. We are fortunate to have such experienced advisors.

So morning arrived and we departed. But not so fast, as we had several technical issues. The primary one was that our 46 had a switch marked “stabilizers on/off”. So does the 50. The 50’s switch, however, turns out to be no longer connected. It has been replaced by a sophisticated Datum electronic control head. Ron didn’t have the manual for the Datum. Since we wanted to depart sometime that day, he swallowed his pride and called Dick MacGrew from Naiad. Dick, to his credit, didn’t laugh, at least out loud, and told Ron how to gain control of the Datum. He also sent us the manual, so now Ron is way ahead of it.

After the Datum excitement, we did manage to exit the marina. There was little traffic, possibly local boats had been forewarned. The 50 is ponderous and forgiving, so Ron had little trouble steering her slowly out the narrow channel. She also has a 10HP 24V bow thruster, which makes the bow thruster on our 46 look like a can of shaving cream.

Once we got out in the main channel we discovered the wonders of AIS. No more peering at large oncoming vessels and trying to figure out what they are up to. The AIS knows. So does the radar, of course, so there is much more redundancy than we are used to. We also discovered that the previous owner wasn’t kidding when he said the computer was slow, it showed us still in the marina when we hit the main channel some miles away. It was immediately added to the replacement list.

We did notice that it seemed very quiet, compared to our experiences on the 46 where the VHF nattered along all day. Actually turning on our VHF solved that problem, and we muddled through the traffic patterns without incident, at least that we know of. We arrived safely at a nice sheltered anchorage in Hunters Bay, some 15 miles from where we started. The new Duet is faster than the old one, even if we were running her slowly, so we got there in about 2 hours, despite lots of current going in various directions.

Team Duet hasn’t forgotten how to anchor, having done it literally hundreds of times on the 46, so that was relatively easy. We settled down to enjoy being out on the boat, which means Ron works on stuff and Nancy sits in the pilothouse watching life go by, in between preparing meals. Life, in the form of enthusiastic local crabbers, was everywhere. All the boats, except us, seemed to have at least one pot deployed and many had several. After a bit, the natural resource police showed up and stopped people to check for licenses and make sure that captives were large enough to keep.

Several days passed in this unique boating way. We did manage to get the dinghy in the water, after much struggle. Getting her in though, was nothing compared to getting her out. Duet has a large, powerful, and comfortable dinghy, which is good. The price for all that, however, is weight. Our best estimates put our new tender at about 700 lbs.

The deck crane is capable of lifting 1,000 pounds, so raising and lowering the dinghy wasn’t an issue. Pushing it outboard wasn’t a problem either, as soon as it came up off the boat deck Duet heeled to starboard. The dink then swung energetically out on it’s own, almost taking Captain Ron, who was hanging onto the control line, with it. Fortunately, he managed to get it under control just before flying over the boat deck rail into the drink.

So we regrouped, rejiggered the previous owner’s block and tackle, and gave it another try. Similar result, but this time we managed to get the dinghy into the water. Figuring that getting it out again was going to be even more fun, we went for a ride instead. The dink zoomed along at 20 MPH, with Nancy at the wheel and Ron sitting comfortably beside her. Definitely a keeper.

But how to tame it? We spent much of the next day working on this issue. During this time we attracted a young seal, who kept surfacing and watching us quizzically. Frankly, we’re not surprised, as we didn’t know quite what we were doing either. We did manage to get the dink back on the boat deck eventually, but it wasn’t pretty.

Duet’s previous owner was a larger gentleman and could presumably outmuscle the dinghy. Given that the dinghy outweighs Ron by a factor of about 6:1, no block and tackle can make us comfortable that we can control it in calm water, never mind in a rolly anchorage. So a power rotating crane was added to the upgrade list.

Finally, it was time to go. We stayed at Hunter Bay for 5 days, each morning we discussed moving on, but we were just enjoying being on the boat. So we stayed, while other boats came and went. Ron tested everything, the generator, the wing engine, the electronics, etc. Nancy stowed and restowed things. The 50 is a larger boat than the 46, and there are lots of places to put stuff. Like the 46, however, it is critical to remember, or write down, where you put everything, otherwise nothing will be found for many a year

The return trip was pretty easy. Some of the electronics were fussing a bit, so some minor rewiring went on Ron’s list, along with a new computer. Rewiring would be required anyway, once the old computer was removed, as some things would be disconnected. On departure we did remember to turn on the radio, and even got the Datum running without having to consult the manual.

Returning to the dock was interesting, which is a boating word for stressful. The new Duet only has a starboard walkway and no gates on the port side. At our home slip the finger pier is to port if you come in bow first, so with the way Duet is set up it is inconvenient, not to mention precarious, to get off. The previous owner had therefore backed her in. Backing the 46 was a process fraught with opportunity for disaster, so we approached backing the 50 with some caution.

This Duet, however, has a control station in the cockpit, where Ron can access the throttle, the bow thruster and the autopilot jog lever to steer. This made all the difference. She backed like a champ. The only problem was that Captain Ron was so excited that he could actually see what was going on (as opposed to having Nancy describe it while he steered blindly on the 46) that he temporarily lost track of the bow. Once the errant bow was redirected, we backed in like old hands.

So now it was time to go home. Tanks were pumped, fridges emptied, lines and fenders checked. The two weeks had flown by, as is typical of our boating experience. But we would be back, actually sooner than we expected, which is a story for the next log. 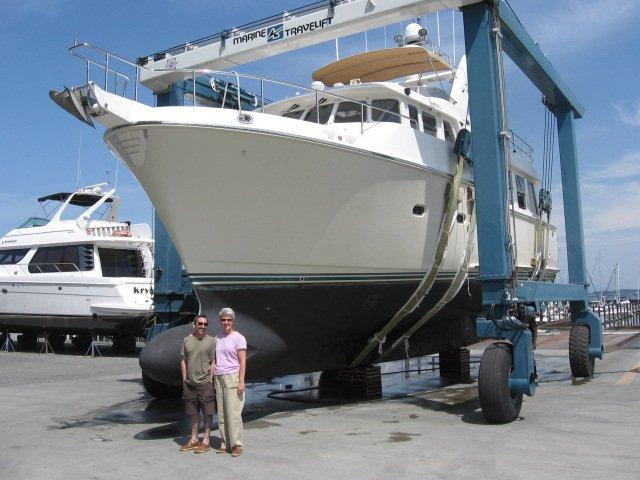