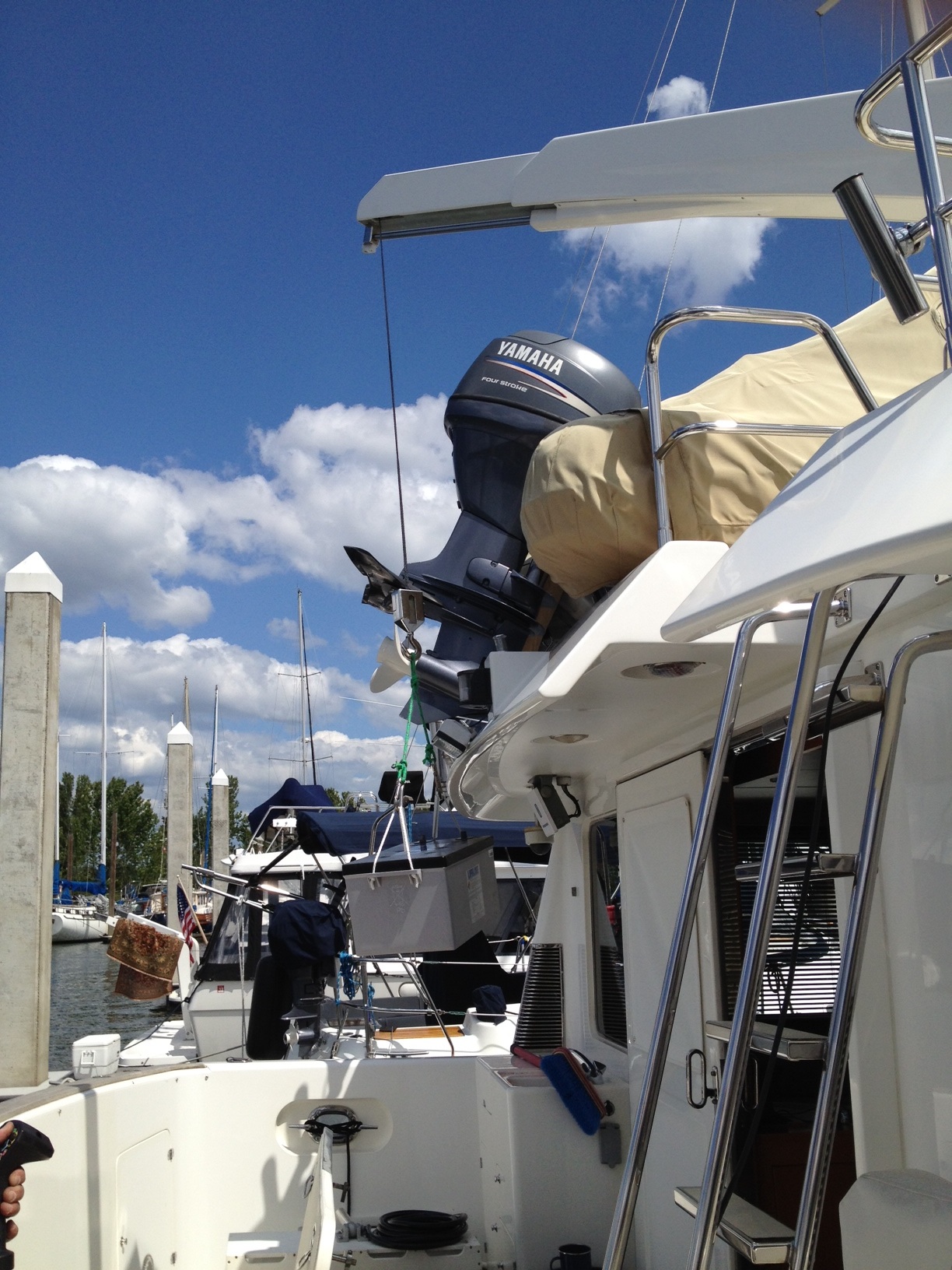 We returned to Duet the week of Memorial Day. The primary mission was to change out the house batteries. Nancy’s Mom, however, was visiting her brother Tom and his girlfriend Jill, so there was to be plenty of family activity as well.

As our regular readers may recall, on our last journey we had tested the house batteries and found them wanting. Nancy, in her role as provisioner in chief, had ordered 6 new AGM 8D batteries, each capable of holding 255 amp hours at 12V, and weighing approximately 160 pounds. Captain Ron weighs significantly less than that, so mechanical advantage and local assistance would be key to removing the old batteries and installing the new.

The first place Nancy checked for batteries was PAE. Nordhavn sells a lot of parts to owners, and batteries are no exception. Their pricing, including shipping, was excellent, but we would have to recycle the old batteries locally. That required loading them into a vehicle capable of carrying 900 pounds and transporting them to the Portland battery recycling yard, which was some distance from Duet. Once we got there, we would need to unload them again. Our SUV has a total load limit of 900 pounds and is not yet equipped with Google’s self driving technology. So we would probably have to make at least two trips.

Given these complexities, Nancy decided to purchase the batteries locally, from Sexton’s Chandlery. Sexton’s provided a competitive price and was willing to recycle the batteries on site, so all we had to do was get them a short block to their front door. So the batteries were ordered from Sextons.

Next, Nancy started on finding local help for Ron. Obviously he wasn’t going to manhandle these batteries around by himself. Unfortunately, while Nancy found a great local guy, he broke a rib the week prior to B-Day and, when we arrived, we found that he was no longer available. Nancy began searching for a replacement, while Ron descended into the lazarette, home of the batteries.

Ron had several jobs. First, he had to disconnect the old batteries. Second, he had redesigned the way the batteries were connected, so he needed to sort all that out. Basically, rather than connecting the incoming wires at one end of the bank and the outgoing wires at the other, he changed things around to improve the overall balance. So, when the system is charging or discharging, all the batteries are doing so at a similar percentage.

As our regular readers probably realize, this is Nancy’s explanation of how the new design works. Ron will be writing a more detailed description one of these days, but in the meantime at least this blog will get published the same year it occurred.

All the necessary wire, battery lugs, etc., had already been delivered, so Ron was on a mission to get it all straightened out before B-Day, 48 hours after we arrived. He ignored the issue of who was going to help him, that was Nancy’s department.

After some conversation with Ashley and her husband, also conveniently named Captain Ron, Nancy figured out that local help was going to be hard to find, unless she got it, as we often do, from her family. Nancy’s brother Tom is a big strong guy who spends his days manhandling trees. He has often volunteered to help with the boat.

Unfortunately for him, this time we were going to take him up on it. Fortunately for us, he not only was on vacation on B Day (because he was supposed to be spending it with his Mom) but he also has a large truck, which is perfectly capable of transporting 900 pounds of batteries wherever they need to go. So Nancy called Tom.

At this point it is important to remember that Nancy’s Mom, now aged 83 and going strong, was due to arrive Sunday night. Spending a day supervising her offspring (and Ron and Jill) installing boat batteries was right up her alley. So a plan was made. Tom and Ron would handle the heavy lifting, Nancy, her Mom and Jill would handle the supervising and the food. Tom and Ron had little to say when this plan was reviewed with them, but Ron, at least, was happy that he didn’t have to handle the batteries all by himself.

In the meantime, Ron had done some more sleuthing in the lazarette. At first he had assumed that the batteries needed to be manhandled out of their individual battery boxes. That would mean that Tom would need to dead lift 160 pounds straight up and then onto the edge of the box, where Ron could attach a line to Duet’s crane. The crane would pull the battery off the box, lift it out of the lazarette and deposit it on the dock in a dock box.

Tom and Ron would then push each individual battery up the ramp off the dock, load it into the Tom’s truck and, once all were loaded, take the batteries to Sextons. There, they would offload the old batteries and load the new ones. The new ones then needed to be brought back down the dock, hoisted into the lazarette via the crane, and placed in their individual boxes.

It’s a good thing that Tom and Ron are made of stern stuff, as this program sounded truly horrendous. Nancy, however, in one of her “this might be a stupid question but” moments, noticed that the large wooden box, in which the individual battery boxes were secured, had screws in the side facing onto the center of the lazarette. What are those for, she wondered?

It turns out that PAE was way ahead of us. Removing the screws let Tom and Ron take off the side of the big box and slide each battery box into the center of the lazarette, where the crane could do all the work.

By Monday night the team was feeling pretty good, having reviewed the plan in extensive detail during an excellent dinner prepared by Jill and served at Tom and Jill’s house in Portland.


B-Day dawned bright and clear. The team showed up at 9AM, as planned. Actually, the whole day, believe it or not, went as planned. For those of you who aren’t boaters, this doesn’t often happen when boats are involved. The batteries came off, went up the ramp, the new ones came down, and went neatly in their boxes. Ron managed to get half of them wired up Tuesday night and the rest on Wednesday. Subsequent tests showed that he had achieved his goal, namely a more efficient bank.

The following pictures show the process. First, rig a lifting harness for the battery, so the crane can pick it up.

Then, lift it up and out

Safely onto the dock. In the first picture you can see Ron using the control for the crane. The crane really paid it’s dues on this project.


Now comes the hard part. The battery has to travel from the boat to Tom’s truck.

There is the minor matter of the ramp before arriving at the parking lot.

Ron actually did pull some batteries up the ramp himself, although we don’t have a photo to prove it.

This was hard work, given there were at total of 12 batteries which had to be lifted in and out of the truck.

Not only do the batteries have to be lifted, but they have to travel a long way to and from the boat.

Now we have to take them all out again?

Finally, it was all done.

Jill helping Ron in the lazarette, as he spent the next several hours hooking things up.

After the battery excitement the rest of the week was pretty quiet. Nancy’s Mom left on Wednesday, and Nancy and Ron spent the rest of the short week working through provisioning lists (Nancy) and finishing various small outstanding projects (Ron).

In addition, we visited Sean, Celia and Elizabeth. Rob joined us and we got a great tour of the fire boat. Sean and Lionel, a Nordhavn 40 owner from Vancouver, BC, are departing in mid June aboard Orca for Port Angeles, WA. Rob, Celia, Elizabeth and Orca’s dinghy are journeying in Sean’s truck to meet them there. Rob will then drive the truck and trailer back to their home, where it will await their return.

We later learned that this journey had gone as planned, and Orca is now cruising Desolation Sound. She will be returning in mid August. Since Duet will be leaving Portland just after that, we won’t see Sean, Elizabeth or Celia again until this winter, when we will stop by on our way to or from British Columbia.

Our next trip will be the last one where we have the opportunity to bring items from home. On our final trip to Portland we will fly, rather than drive, as we will be departing aboard Duet to British Columbia. Prior to that we will finish the provisioning, and either postpone or complete various projects. Fortunately, that is a two week trip, at the end of July, so it will give us enough time to sort out most things.

In the meantime, we returned to Tahoe, looking forward to house guests over the July 4th weekend. Our home town, Incline Village, puts on quite a celebration of our nation’s birth, over three days, which includes impressive fireworks over Lake Tahoe. Our friends enjoy visiting during this bacchanal, so we were expecting a full house.