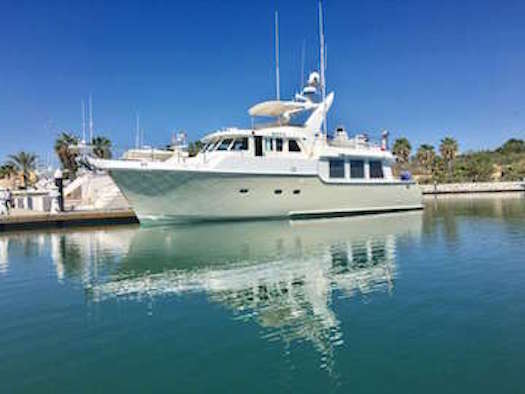 As some of you know, we sold Duet in March.  While it may seem abrupt, this decision has been percolating for some time.  We began, last summer, to talk about what we wanted to do with the boat in ’22.  One of the advantages, or disadvantages, depending on your perspective, to owning a boat like Duet, is you can take her almost anywhere.  We, for example, have traveled more than 20,000 miles aboard her, from Anacortes, WA to Brisbane, Australia, and many points in-between.  We’ve had some amazing experiences, met some marvelous people, and fixed a lot of equipment along the way.

Cruising a boat like Duet, in remote places, is time consuming and expensive.  It is a truly rewarding experience, but it does tend to suck all the air out of the room, namely you don’t do much else.  Over the decade we’ve owned her, we’ve talked a lot about what else we would like to do, once we had more time when Ron retired in June of ‘20.

The initial idea was to keep the boat and also do some land travel, we had already scheduled a trip to Kenya in May of ’22.  The big problem with this idea is that it leaves little time to spend at home, or with family and friends.  To visit all the places we want to visit, and can’t take the boat, like the interiors of India and Africa, plus cruise the boat, is more than a full time job. We eventually figured this out by trying to make it all fit on a calendar.

Something had to give. For the last ten years, it’s been the land travel. Now that we’ve achieved our dream of crossing the Pacific on our own boat, we had some trouble prioritizing the boat versus other dreams.  So we began to talk about selling the boat.  This was not an easy decision.  Duet has been a big part of our lives for a long time, as has the cruising life.  We have, as some readers may remember, made this decision before, with the previous Duet, Nordhavn 46 hull #50, which we cruised from ’00-‘07.  So this wasn’t a new debate.

By the time we arrived in Puerto Vallarta in January of ’22 this topic dominated our conversations.  We did a little cruising, hauled Duet out for her bi-annual bottom paint and fin service and then took a serious step, we called our PAE broker, Larry Gieselman.  We’ve know Larry since around ’93, when we first visited PAE, well before we bought our 46.  We trust his judgement.  He said, if you get the boat to Dana Point, I can probably sell her before she arrives.

So we called the delivery crew he recommended and off she went.  Actually, it took more time than that, there were long evenings of emotional discussion about giving up cruising, and the changes it would mean for both of us.  But, in the end, we concluded that nothing is irreversible, we’ve sold boats before and never had a problem buying another one, if that fit our goals at the time.

Prior to the crew’s arrival in Puerto Vallarta, Ron wrote pages of instructions, we fueled her up, and prepared her as if we were going to be aboard.  We paid for an insurance waiver, Larry arranged for a brokerage slip, and we accepted an offer for her, sight unseen, with a backup offer in the wings. Ron also spent time on the phone with OMNI Bob, our weather router, and, fortunately, also the one Captain Colin uses.  A window was identified, the crew grabbed a flight from Los Angeles, and off she went.  Nancy avoided seeing her off, as she cried when the 46 left the dock without us and she didn’t want to go through that again.  Neither did Ron.

We followed her track anxiously, and Ron spoke with Captain Colin every day.  The crew of three ran nonstop from Puerto Vallarta to Ensenada, with two rough nights, but overall excellent weather, especially for February.  Duet operated flawlessly throughout, which apparently is not the norm for delivery crews.  We hoped she would, although Ron was a little concerned, as she hadn’t done much cruising since the previous summer.  We did do a lot of testing before the crew arrived, and that paid off.

We flew north to meet her in Dana Point, where the new owners inspected her, surveyed her and closed the deal.  Funnily enough, they are folks that we know and who live about 35 miles from our home.

The new owners will live aboard most of the time and will be based in Anacortes, WA.  So Duet is going full circle, returning to familiar waters.  They wanted to get her north as soon as they could, so they could begin to get to know her.  The owner, a captain and a mate took her from Dana Point to Seattle, with several brief weather stops, in early April. Duet again performed flawlessly, in rough weather.  She is a superb sea boat, no question, and we will miss her.  As one of our friends once said, however, you are merely a caretaker of these boats, they will long outlast your cruising dreams.  So Duet is off to a new life, initially in the Pacific Northwest and Alaska, after that who knows?

We appreciate our readers’ time and interest.  This blog will be monitored but, now that we are no longer cruising, we will not update it.

Starting a new chapter planting a tree in Kenya, May, 2022.

16 thoughts on “Change of Watch”