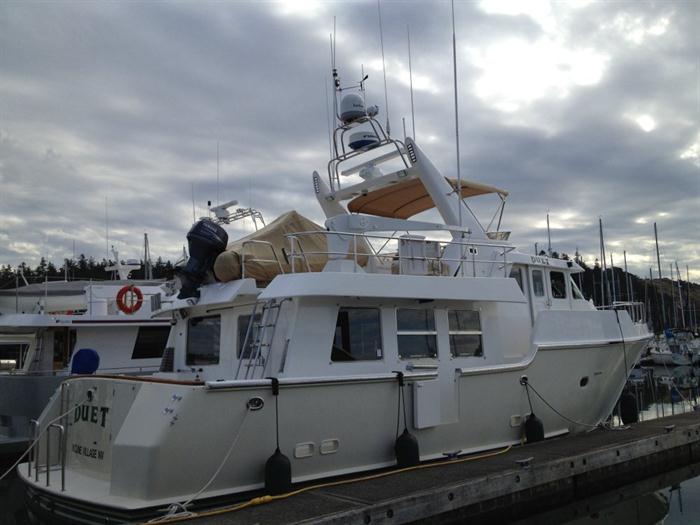 So, after a great two weeks we returned home to Lake Tahoe. Captain Ron went back to work as Dr. Ron and Nancy settled into life at the lake. All went well, for a day or two. Our regular readers know that we are used to having Duet within an easy drive. Unfortunately, West Coast geography prevents this. So we need someone to watch over her when we are not there. The watching part worked out fine. The watchers did their job, they called when something went wrong. Unfortunately, what went wrong took more than a phone call.
Boaters know that leaving a boat requires thinking through all the things that might happen while you are not there. This includes bad weather, tidal changes, etc. What it didn’t include, at least for us the first time around, was strange things that can happen, which no one quite understands. In Duet’s case her electric cord fell into the water. Now this may not sound like a big deal, and it isn’t, provided that all that falls into the water is a bit of the cord. If the connection between two cords falls in, the cord shorts out. That is what happened in Duet’s case. Why it fell in we will probably never know. What we are grateful for is our dock neighbors, Bill and Arlene, who called Frank who called us.
The logistics of this accident are worth some explanation. Duet, as shown in the above picture, sits stern to in her home slip. The boat end of her electric cord plugs into an outlet on her port (left) forward deck. So, when she is in the slip with her stern in, we use two cords, a 50 footer and a 25 footer, connected in the middle, to reach the plug on the dock. That connection is what fell into the water. If you look closely, you will notice that the connection is on the dock, rather than inside the boat. That was our mistake and we paid for it, dearly.
Once cords fall into the water and short out they are often unsafe for future use. Frank, bless his heart, offered to buy us a new cord or cords and install them. Unfortunately, Duet has one single 50 amp 125/240 volt cord, rather than two 50 amp 120 volt cords. This large single cord is hard to get, and there weren’t any available locally.
What to do? The easiest, although not the least expensive course, was to fly up, repair or replace the cords and make sure she was properly settled in her slip. So that’s what we did. It was a short hard working weekend, we arrived late Thursday night and Captain Ron went right to work the next morning. Fortunately the newer longer cord was salvagable. It needed new plugs installed, which took most of the day. The shorter cord was toast.
We had an older cord which had led a hard life. Ron stripped it back to a shorter more reliable length and installed new plugs. Presto, after about 12 hours of hard work, new cords. It sounds easy to put plugs on a cord, but it’s not as easy as it looks. The cords are large, heavy and difficult to cut. They require watertight boots over the actual plug, which are a bear to get on and off. The bigger the cord, the tougher the job but Captain Ron persevered. Budget master Nancy worked out that the trip up had cost about the same as buying new cords, so in the end it was a wash.
We learned a very valuable lesson. Do not leave the connection on the dock as, sure as shooting, it will fall in. So now Duet’s cord connection is safely inside her high bulwarks, so someone would have to actively haul it out and dump it in the water. We’re not saying that this couldn’t happen, stranger things have happened on boats, but we hope it won’t.
Leaving Duet alone isn’t something we like to do. She is among friends, Bill and Arlene, Frank, and our boat watcher Steve, all keep a close eye on her, but we are much happier when we are there. Given our planned lifestyle, however, with several months at our lake home and several on the boat, we are going to have to get used to leaving Duet alone. We will get used to it, but we don’t have to like it.
In our next blog, Duet’s first big trip, southbound to Seattle for a refit.