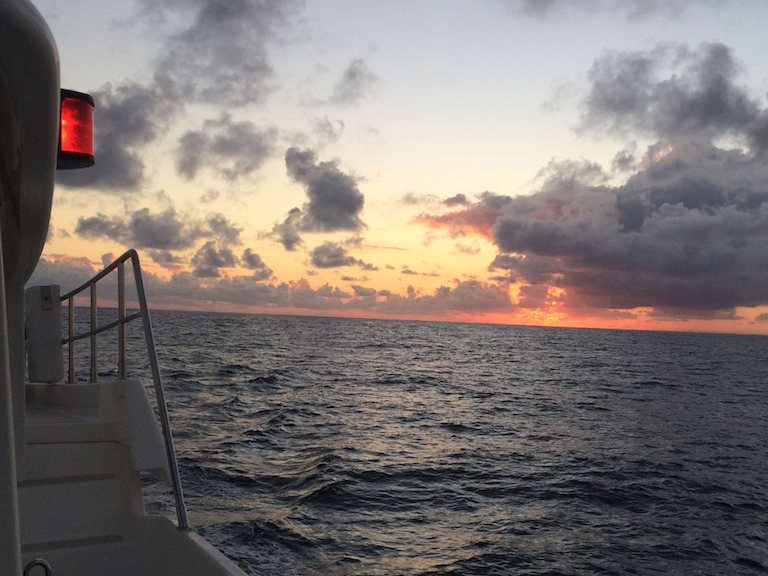 During our crossing of the Eastern Pacific, from Mexico to the Marquesas, we used an Iridium GO! for email.  It worked perfectly throughout the journey, but is not capable of sending pictures of any size.  Once we got back home we got the pictures sorted out and are posting them now.  For the first time, we are also including some video, although it is mainly unedited.

As regular readers will recall, we departed Puerto Los Cabos a day later than planned, so we have several sets of departure photographs.  These were taken by Jo, whom we met while at the marina.  She and her husband cruise aboard a sailboat and were on their way north.    Duet is shown below waiting in her slip for Ron and Sean to test the starter.

When we finally did pull out, everyone was enthusiastic.

Once we are underway not much happens.  We read, watch the miles go by, eat, rest, and then start it all over again.  In the meantime, the boat runs automatically.  Someone is always in the pilothouse, however, just in case.  Once we were more than about 400 miles from land, however, we saw no more boat traffic until we arrived.

Ron napping.  Sean brought us a set of Bose noise canceling headphones, which were superb.  In this photo you can see our survival suits, out and ready.  The overboard bag is also out on the floor, just in case.

Sean talking to his family via his DeLorme InReach or the Iridium GO!.  Both units ran continuously, and we often had multiple beeps and other electronic sounds in the pilothouse, indicating a communication from somewhere.

Ron and Sean watched videos on various exciting technical topics, such as how to dismantle your lawn mower.

Nancy and Sean awaiting supper.  What to have for dinner was the biggest decision of the day, and was seriously discussed each morning.  We took turns preparing it and cleaning up.

Sean is a big believer in vegetables.  Since Nancy isn’t a big fan of green beans, she fed most of them to Sean while Ron, who likes them, wasn’t looking.

Every morning and evening we were treated to an incredible sunrise or sunset.  We don’t know which one this is, but it’s typical of what we saw every day.

Sean brought us a set of 3 hand lines to fish.  He also brought us a set of fish identifying documents. He and Nancy fished every day the weather was relatively calm.  We caught nothing on the entire trip, but Nancy wanted to be sure she was ready, just in case.

A little over halfway through the journey Sean started recording what he saw every night when he came on watch at 4AM.  For example, at about the halfway point, this is what he saw.  TTG is Time To Go, namely 8.8 days.  Duet’s Heading is 221 Degrees Magnetic, the Range to the waypoint is 1,382 miles, the Bearing on the waypoint is 215 Degrees Magnetic, so Duet is steering slightly to the starboard of the waypoint to make up for the impact of current or weather, her Course over Ground is 220 Degrees Magnetic so the correction is working, her Speed Over Ground is 6.4 knots and the Depth doesn’t make any sense.  The depth sounder doesn’t see anything below about 1,000 feet and at this point the ocean was about 12,000 feet deep.

About 7 days into the journey we started having problems with our hydraulic stabilizers.  Eventually, Ron decided to shut them off, rather than have the belt that drives them disintegrate .  Over time, we gradually reduced the use of the fins, so everyone was pretty acclimatized to the motion by the time they were turned off completely.  Once the fins were off, Duet handled the situation with her usual aplomb, her motion did increase a bit, but it was entirely predictable.

In the first video you can see the fuel bladder, which is being emptied, so at this point it is about half full

In the video below, you will see water come in the cockpit scupper.  This is not unusual, and happens whenever the waves whack the cockpit at a certain angle.  The water runs right out again.

During Days 7-10 we got a lot of support from Chris Fonteneau, who is the Naiad guru in San Diego.  Ron talked to him several times on the  phone and Chris sent Ron a lot of technical information.

As part of the testing, Ron also sent a lot of information to Chris

The culprit belt is show below, after it was removed when we arrived.  As you can see, it wasn’t in good shape.

We still don’t know what caused the stabilizer failure.  Ron is troubleshooting it with Chris.  Sean and Ron installed a much tougher new belt once we reached the Marquesas and the fins are operating normally, except for infrequent rapid pressure drops in heavy sea conditions.

We can reveal that part of the rite requires the wearing of silly costumes.

After the rite was completed, we all swam across the Equator. This was not something we had originally planned but Bill on our buddy boat Daybreak was going to do it and Duet’s crew rose to the challenge. We did it in two teams, Nancy and Sean first, then Nancy and Ron.  Nancy is the best swimmer and so serves as Duet’s lifeguard.  Conditions were about as perfect as they get, calm and sunny.  The water was warm and 2.5 miles deep.

After the Equator swim was completed Duet got underway again.  Before we left Mexico our good friend Christy baked us a rum cake to celebrate our crossing.

Now we are near the Equator, it is hot.  And humid.  Did we mention it was hot?  Running Duet’s air conditioning, however, requires the generator, which uses diesel.  Ron wanted to maintain our diesel reserve until he was certain we wouldn’t need it to reach our destination.  The only time we were able to cool down was when the water maker ran, every other day, or when there was a big squall.  During the squalls, we closed the boat up, as the rain was often torrential.

Ron hoping for a squall

By this time we were getting pretty close

Squalls on the way

Most exciting, we could finally see, and eventually communicate with, Daybreak.  She had been slowly catching us during the passage, but she never passed us.  We had gradually speeded up, as Ron became more comfortable with our fuel reserve.  Daybreaks AIS signal (blue) is visible to the right of our course.  The large island to the left is Nuku Hiva, our destination.

We watched our final sunset at sea

Sean did his last night watch from midnight to 4AM

Then the radar, which usually sees things first, sighted land.  About an hour later Nancy saw it, Ron and Sean woke up and we all watched Nuku Hiva emerge slowly from the mist

In the video below, after the engine shuts down, you can hear the engine room ventilation fans running.

That night we had dinner aboard Daybreak.

Jerome spent some time telling Nancy how big the waves really were.