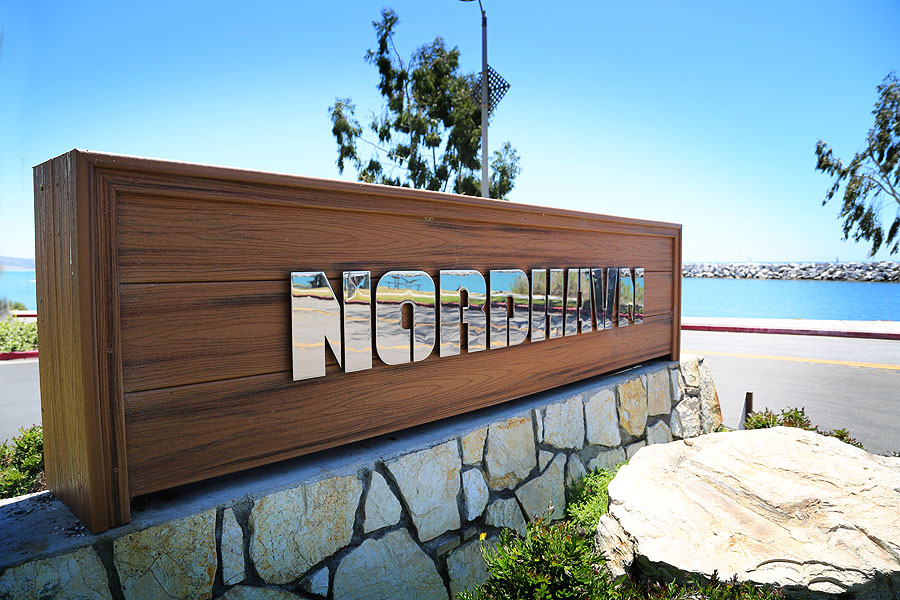 In March we made plans to attend the Nordhavn Rendezvous in Dana Point, California, which promised to be an extravaganza of considerable proportions. This was our first Rendezvous, as there were too few Nordhavns around to have such gatherings when we owned our 46, so we weren’t quite sure what to expect.

It turned out to be a fantastic fun, we met folks, like Eric and Christi Grab, of the Nordhavn 43, Kosmos, with whom we had corresponded since before they began their circumnavigation, but had ever met face to face. We also met their new crew, Kevin, who was boating before he could walk. Nancy was extremely touched to find that Christi dedicated her books to Nancy, along with other folks who are far more knowledgable. Needless to say, it’s a great book, and can purchase it at their web site.

We also met Sue and Larry, of the Nordhavn 46 Beverly S. It turns out they were readers of our 46’s blog, and recognized us from our pictures. We are always concerned when we find out readers might believe some of the things we say. Fortunately, they usually turn out to be pretty savvy and take all our advice with a serious grain of salt. Moreover, when we meet, it often turns out they have done far more than we have and we learn more from them than they do from us. This turned out to be absolutely true of Sue and Larry, who have cruised from southern California to the Pacific Northwest and back many times, and promised to forward their favorite anchorages.

We spent time with Margaret and Bob, the previous owners of N46 Suprr, who have cruised over 50,000 nautical miles, from Europe to their home in Australia. They had much wonderful information on New Zealand and Australia to share, hopefully we didn’t bore them to tears with our endless questions about the area, as it is definitely on our list to visit.

We finally caught up with Lionel, who bought the Nordhavn 40 Chinook last year and is now living aboard just north of Vancouver BC. Lionel was a Nordhavn Dreamer, whom Nancy met on line about 18 months ago. He recently crewed aboard Sean’s trawler Orca on an offshore journey from Portland, Oregon to Port Angeles, Washington.

In case you are wondering how Lionel ended up on Sean’s boat, Nancy tries, when she can, to perform introductions that help both sides. So she introduced Sean to Lionel. Sean got a capable crew member, and Lionel got some offshore experience on a well prepared trawler with a good Captain, so hopefully it was worth it for both of them.

Lionel is shown at left in the photo below, chatting with Bob and Margaret.


We spent time with N50 Tivoli owners Clayton and Deanna, with whom we have corresponded, as well as Peter and Laurie, who are expecting their new Nordhavn 60 at the end of June. Peter is potentially even more technical than Ron, which is a scary thought. Peter and Ron have exchanged a series of emails, which, at least to Nancy, have been completely incomprehensible, but seem to be useful for both of them.


Ron spent several enjoyable hours in engine rooms with Bob Senter, and attended every seminar. While he’s not as social as Nancy, he did manage to talk to several folks without Nancy having to introduce him.


In the picture below is Robert Kinney of Alcom Electronics, who did a great talk on autopilots. Believe it or not, Alcom did the electronics installation on Duet, 14 years ago. Robert was with Alcom then, although we didn’t task him with recalling Duet in particular, among all the Nordhavn installations he has overseen.


We even caught up with our Nordhavn uber salesman, Larry Gieselman, who, needless to say, was selling boats.


On the small world front, the son of good friends of ours from Tahoe, Devin Zwick, has recently joined PAE as a salesman. Previously, Devin was a boat captain and made a number of long journeys in Nordhavns, including trips to Hawaii and across the South Pacific. We plan to pick his brain when our time comes in those waters.


During a conversation with Dan Streech about the various offices PAE has inhabited, we figured out that our first visit was nearly 20 years ago. That is when we saw our first 46, and the rest, as they say, is history. Since then, PAE’s digs have gone decided upscale, the new office is quite something and provides a great venue for this kind of occasion.

As is often the case, serendipity also played a role in our visit. We bumped into some Nordhavn 43 owners, from Seattle, who happened to mention that close friends of theirs had just acquired a Nordhavn 46 on the East Coast. Nancy, never shy, asked which 46? Sure enough, it turned out to be our 46, which had been for sale for about a year, as her owners weren’t using her enough. So Phantom, previously Duet, and now named Salish Aire, is on her way to Seattle. She boarded a freighter in Fort Lauderdale and arrived in Vancouver, BC, about three weeks later, apparently none the worse for wear.


Her new owners, Norman and Clarice, spent their first night aboard her in late June. We hope to catch up with them, and Salish Aire, during our trip to BC this fall. Salish Aire even has a new website, the third for this 46.

During this trip, we discussed taking Duet to Southern California, most probably San Diego, this winter, after spending a couple of months in British Columbia. After much evaluation, and gathering extensive local knowledge from various folks, we decided that cost and effort of the 2,000 mile roundtrip would not be outweighed by the better weather. California is also not a boat friendly state, so there are tax consequences connected to bringing in an out of state boat. In the end, after much discussion, we decided to remain in BC this winter.

As an aside, we visited a nice marina, Kona Kai in San Diego while we were there. A number of Nordhavn owners, including Eric and Christi, keep their boats there, as does Bob Senter. It’s a beautiful facility and would have made a great home for Duet, so we shall keep it on our go to one day list.

There are advantages, believe it or not, to wintering in British Columbia. We will be able to take Duet out in less than perfect weather to see how she does. While this sounds more than a little nuts, namely why go out and get bashed around if you can stay home, we find that the best time to experience new things, particularly challenging things, is not when the pressure is on. We are happier to get bashed around within easy reach of a safe anchorage, than wait to find out how the boat (and we) do in difficult conditions 24 hours from somewhere safe and comfortable.

In addition, BC is a spectacular cruising ground. In the winter there are fewer boaters, and Duet is well equipped for winter cruising. Nordhavn 52 Dirona owners James and Jennifer Hamilton have cruised extensively, both aboard Dirona and their previous boat, in this area in the winter. They have a great web site and have also written an excellent book, Cruising the Secret Coast,on the area.

By Sunday, even Nancy was finally talked out and we flew home to Reno, with a large bag of goodies, including two Rendezvous t-shirts, which will join our large collection of “we were there” clothing.